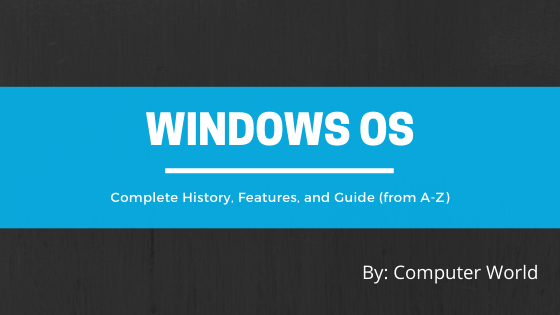 Hey readers! Welcome to Computer World. Today we will discuss Microsoft Windows or Windows Operating System. The history, achievements, improvements, and versions. Connect with us in this post to learn everything in short. Let’s start.

Microsoft Windows or Windows operating system is a type of system software. Windows OS developed by Microsoft Corporation in 1985.

Windows is the first GUI (Graphical User Interface) introduce in the market. It is the most compatible operating system for personal computers. In present days, there is almost 90% of devices use the Windows operating system.

Windows 1.0 released in 1985. Both Apple’s and Windows operating system complete their work at the same time. But at that time windows achieved more popularity.

Windows 1.0 is not the complete operating system. Many components or features added init. Like Notepad, calculator, control panel, clock, etc.

Windows 386 use the virtual mode of Intel for multi-tasking. While using the high memory area, windows 286 runs in real mode.

In 1990, the version of Windows 3.0 released. The design and features improved in this version of windows.

In the first six months, 2 million copies of Windows 3.0 sold out.

Windows 95 released in August 1995. There is no big update in this version of windows. It is a consumer-oriented operating system.

The design and architecture of this version of OS are compatible with early versions.
It handles memory management. This version is also responsible for file handling and error handling.

It checks the hardware configuration changes.

Learn How to Become a Project Manager.

One more addition in the Windows 9X family is windows 98. It released in June 1998.
Like Windows 95, this version of windows also supports FAT16 and FAT32. There are many improvements that happened in this version.

Design and user experience also improved. It relies on HTML. HTML is a hypertext markup language.

There is a long time process behind the release of Windows 98. Lots of other versions released by Memphis. Memphis is the codename. Windows 98 starts to develop under a codename.

Here is we discuss the all early versions of 2000 Microsoft windows. Microsoft improves its OS time by time. The era of 2000 is the era of the boom of the windows operating system.

Other editions also release time by time. These all versions have their specific purposes. And all these versions target different markets.

When we talk about security. Windows 2000 was the most secure version at that time. But the high level of viruses successful to attack it.

The start menu of Windows 2000 has the ability to start many programs without closing the main menu. This happens by holding down the shift key.

There are lots of other updates. Like game and system utilities also improve. For game developers, the latest version of DirectX released. For system utilities, the improvement in administration tools like create, open, and save.

The major release in the history of the windows operating system is Windows XP. It released in August 2001 and start to sell in October 2001.

The versions of Windows XP are both for professional and home users. Although the initial plan is to release separate windows XP for business markets.

A completely new and updated visual appearance introduced. There is a lot of improvement in the user interface and start menu. Windows protection activations introduced in Windows XP.

A lot of improvement in networking. Like peer-to-peer networking, network bridging, and support the DSL modems.

Microsoft official ceased the update of Windows XP in April 2014. The security updates by illegal and unofficial methods came in 2019. It always discourages this type of practice.

Long time and lengthy development process, Windows Vista released in November 2006. It is also the major release of Microsoft.

Windows Vista released in different stages. In November 2006, it was available for buy and download.

Also added the feature of restore and backup data. In ultimate and business version of Windows Vista. The complete computer backup is available.

The new feature of calendar and photo gallery was also introduced.

Another release by Microsoft is Windows 7 operating system. The initial development of this version is release to manufacturing. Windows 7 released in July 2009 and was available for use in October 2009.

Unlike Windows Vista which releases a great number of features. Windows 7 does not release more features. Its focuses on the compatibility of already released feature and software.

There is a lot of improvement in the calculator. By including programming and statistics capabilities.

Lots of changes in the taskbar in Windows 7. Quick launch toolbar replaced by the ability to pin the applications to the taskbar.

There are several new features in windows management. Libraries, a new file management system added. Users can create folders. And by default, some folders are already created in libraries.

Windows 7 has six different editions and versions. Home user, Professional and Ultimate editions are available. Every edition of Windows 7 has its own features and capabilities.

Windows 8 released in August 2012. To migrate windows 8 from windows 7 is easy. The process is to update windows 7.

After the improvement in windows 8, windows compete with android and iOS.
Start screen introduces in which apps displayed with a list. The online store for purchasing software added.

Although reaction towards its improvement, performance, and security is positive from windows users. But the new user interface criticizes. Because it is confusing and difficult to learn, especially with a keyboard.

Windows 8.1 released in August 2013. And start selling in the market in October 2013.
It is for professional use, business use, and also for laptops and tablets.

The aim behind releasing this version is to full fill all the complaints of users. It is by improving the user interface, especially the start menu. There is also improvement in windows explorer, one drive, Bing, and taskbar.

In January 2018, Microsoft announced that. Users upgrades to windows 8.1 and windows 10 for continue support.

There are other lots of improvements in Windows 8.1. But people still criticize. Because many issues and problems can not be resolve. So windows 8.1 was also not more popular.

Windows 10 is the current windows operating system used all over the world. We learn about all versions of windows. Some are popular and some criticized by users.

Windows 10 released in July 2015. Microsoft release the history best operating system. With this release the complete change in the user interface. Positive reviews come from people. But there is criticizing touch screen.

Microsoft step by step improved all flaws. And now Windows 10 is the most popular operating system in the world.

Almost 70% of all world computer systems. And 40% of mobile devices running on the Windows 10 operating system.

If we talk about features. Then Windows 10 improve the user interface and user experience. A new type of start menu introduced. The list of operations and other things added to the start menu.

Now in June 2021, Microsoft announced Windows 11. A successor of Windows 10. Windows 11 was first set to release recently on October 2021.

Windows 11 is the Microsoft big project. It release in the market on October 2021 for testing purposes.

Microsoft improves their operating more for developers and gamers. The Microsoft store, security, and other things also improve.

We can update you in the future with all valid information. Connect with us.

Ok… We have discussed all versions and about all things of Microsoft windows in detail. I want to tell you about the 4 most popular operating systems in this article. But when I research Microsoft windows. It is a long topic. That was not clear in a single post.

I try my best to cover all the important things. But you think any important thing about Windows operating system is not covered. Then please comment below and we will add that point to this article.

Hope you enjoy this post. Meet you in the next article about Mobile Operating Systems. Thank you.