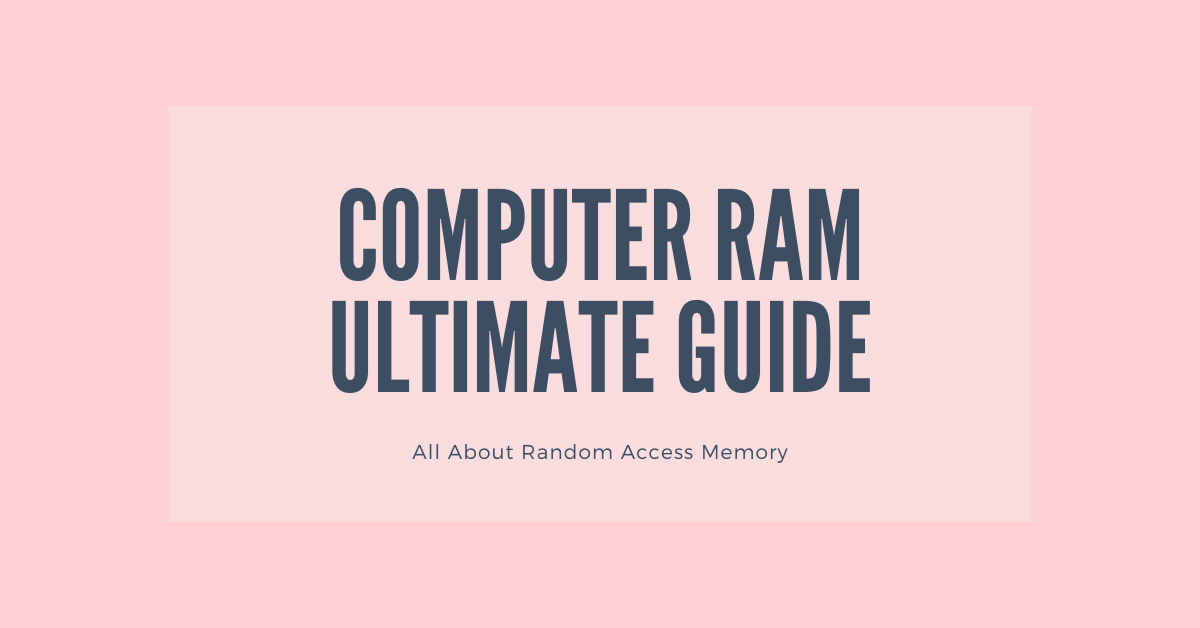 Are you curious about computer ram? Today we are discussing ram in computers. What it is. How RAM works. History and types of RAM and all about it. It means it is the ultimate guide of RAM. After reading this guide, you will be aware of computer ram.

In our previous posts, we discuss many times about computer memory. Also, we discuss types of computer memory. But something is missing that is important to discuss with you. So we decide to write a complete and ultimate guide on RAM. In our next post, we can also guide you to the best ram for your computer.

What is Computer RAM?

Computer RAM or Random Access Memory is the primary storage device of the computer. It holds computer data for a short period. RAM reads and writes data at the same time. But time will be consumed when data write in secondary storage devices.

Term and concepts of RAM are tricky. You can focus on this article to understand all things.

You know, RAM stores data in a short period. So when the machine power is cut off without saving data, all data will removed. Because in today’s technology, RAM works as volatile memory.

In volatile memory, data is removed after the computer is off. But in non-volatile memory or secondary storage devices, data can’t be removed once saved.

In past, different companies use different methods to store information. In 1930, IBM use a mechanical counter. As same, some other computers use delay lines and relays. As well as time passed, more innovation happens in this industry.

Drum memory, vacuum tube, and transistors are also used to store information. These types of memory are not so much expensive. But registers, small and fast memory, are expensive.

The era of 1947 come when Williams tube starts working on RAM. He use a cathode ray tube in his experiment. Although the capacity of the Williams tube is low it is faster than registers and vacuum tubes. The first successful program runs in 1948 at the University of Manchester. This test runs on a baby computer in this lab. The development of magnetic core memory completed in 1970.

Metal oxide semiconductor or MOS transistor invented in 1959. The Idea given by Mohamed M. Atalla and Dawon kahng. Both work together for this. MOS ram is also called MOS transistor. It is cheaper than magnetic core memory. Also consume less power. When MOS integrated chips invented in 1970. The era of MOS started as MOS dominate magnetic core memory.

There is more discussion of the history of computer RAM. But here we stop this and transfer to our next topic of types of RAM. In types of RAM, our history of RAM parts is also completed. How? Let’s check.

The most interesting part of this article is here. Types of RAM. Because RAM is important to run programs on our computer. So, before choosing which RAM is best for our computer, we know every type of ram. When we know about them, it’s easy for us to select the most efficient and fast computer memory for our computer.

We can divide this part into two parts. In the first part, we discuss the two parts of ram. And the next part is about the advanced types of RAM.

So, there are two main types of RAM.

In 1990, a new type of RAM called SRAM or static ram introduce into the market. As the name shows, static means constant. Static ram work in constant power flow. Because its power is constant so there is no need to refresh it.

Because SRAM is also a volatile memory. So all data that is save on it will remove once the system power is off. It used as cache memory. Six transistors use to store a bit of memory in SRAM.

SRAM consumes less power. But it is expensive. Its capacity for lesser memory is also low. Access speed of SRAM is faster.

Working in DRAM begins in 1970. And it introduces in the market mid of 1970 to 1990. By name show dynamic, it needs to refresh again and again while functioning. The capacitors of this memory discharge energy time by time.

DRAM is also a volatile memory. Data will be lose or erased once the power is off. More, DRAM allows you to store data in a separate capacitor. Now it is the standard memory of many modern machines.

The advantage and disadvantages of this memory are the opposite of SRAM. Like it consumes more power and access speed is slow. Same as that other.

In this modern era, the more powerful types of ram introduce in the market. Because you do not feel bored we can take it short. Here we can discuss the DDR RAM types.

The DDR or double data rate ram is provide faster speed and higher bandwidth. It is capable of two writers and two reading instructions at a time or in a single cycle. Also, it works at a lower voltage.

DDR2 is an upgrade or updated shape of DDR ram. It is faster memory. That’s run at a higher clock speed. Like DDR ram it is also capable of reading and writing four times.

Same DDR3 and DDR4. The next invention doubles the speed in comparison to the last. DDR4 is the most advanced type of memory. We can guide you to the updated and fast ram in our next buying guide article.

This article will updated twice a week. Because many this remain to add it.

Computer ram is the most important part of computer memory. When the computer operates and does work. This memory helps the computer to run faster. RAM can store all data for that time.

In this article, we try to convey our all knowledge about computer ram. We know many things remain and need to discuss more. And some also remain discussed. Stay connected with us to learn more about the computer world.

Computer Architecture – Complete Guide from a to z

How to Become a Software Developer without Degree