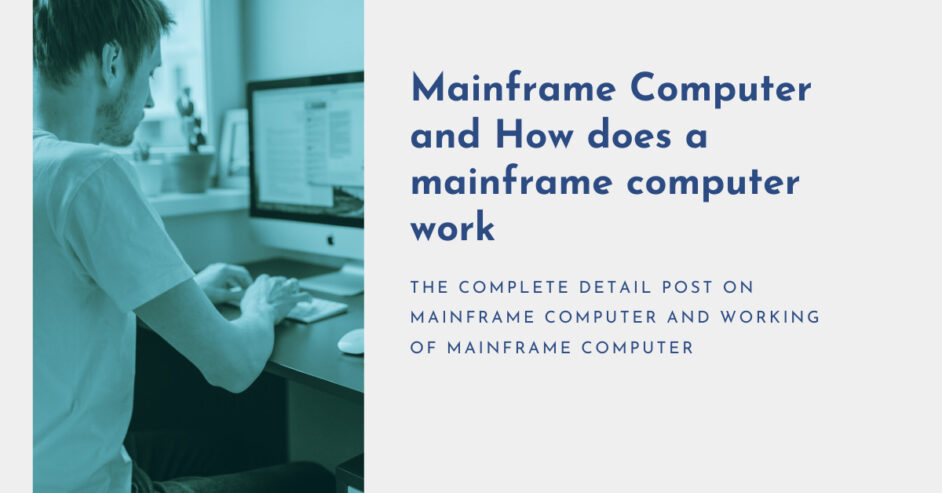 In our previous article on how do supercomputers work. You can read about supercomputers in detail. After the reading of both these articles. Check the difference between a mainframe computer and a supercomputer.

What is a Mainframe Computer

Mainframe computers are big enough but not more than supercomputers. They have more power than other computers used in daily life. Most large scale, mainframe used as a server.

The mainframe is a big size computer system. They are big because of their storage size and CPUs. They process data on large scale and also save a large amount of data in their memory.

Mainframe computers are multi-tasking and multi-user systems. The system is manage by a big team of technicians. They are high qualified programmers and engineers. So, the mainframe is a type of computer. But big in size in comparison to other personal computers.

How Does a Mainframe Computer Work

When do you say that how does a mainframe computer work? Then we divide the working of the mainframe computer into different parts. Like data warehouse, allot processor time frame, etc. You can read each part here in a little explanation.

As you read in our previous article about the history of storage media devices of the computer. The digital data and files save in computer memory and storage. But in mainframe computers, data save in application form in the computer itself. So the mainframe gives access to users from their file when they want to log in.

The mainframe computer enhances its productivity. By saving all data and files in one mainframe system. So admin itself access the data and manage as he wants. Also, the authentication has an admin’s hand that who he gave access. So there is no way for attackers and hackers to breach the security.

This is one side that I see all my readers to understand how does a mainframe computer work? Now you can read more about mainframes like their history and architecture. Also features and advantages or disadvantages.

The development of the mainframe computer starts in the early 1950s. In the beginning, there are the big-size mainframe developed. By that time, a lot of improvement added to the system. The number of Intel chips increasing so that it works smart.

After the 1990s, the new era of mainframe computers started. The user of servers is growing day by day. Also, corporations that work on it found new uses of the mainframe. As the number of e-business increased. The need for mainframe software also increased automatic.

Another reason for the increased use of mainframe computers is Linux OS. Linux operating system gave the users a new world to work on open-source software.
The latest microprocessor mainframe computer is z15. IBM announced z15 in 2019. The early versions z13 or z14 released in rows 2015 and 2017. The latest version of z OS is release on September 30, 2021.

The z operating system is still used in IBM mainframe computers. The latest version is V2R5 introduced in September 2021.

In the early 1950s, the mainframe was only the console. It is a set of punch cards and paper tape. As of time, there is improvement in mainframe architecture. CMOS design in the 1990s, replace the old architecture of the mainframe. This new design reduced the energy costs for cooling and power.

There are many features and characteristics of modern computers. Some are discusse early on top. That mainframe computer is reliable and compatible. They are secure and fast in performance. Many operating systems used in the mainframe. As mainframe support to run many machines on virtual.

Many customers run two types of mainframes. One is in their backup data center and primary data center. Mainframe design in a way that handles high input and output.

Mainframe computer has many advantages. They are capable of holding high-speed data at the same time. Run high-volume applications with ultra-speed. It stores a large amount of data as there is a big size memory insert in it.

The mainframe is divide into small logic systems. You can use many machine systems on it. Its virtual supportive environment is better than others.

As mainframe computers are use in big organizations and companies. So that these organizations need more security for their user’s data. Mainframe provides authentication and a secure environment to its users. So they can trust this machine.

At the end of this article. You can decide that you need a good mainframe computer for your company and organization. Because it is most secure and fast. It can complete your work to process and upload data in seconds.

What is an Intranet and Characteristics of the intranet