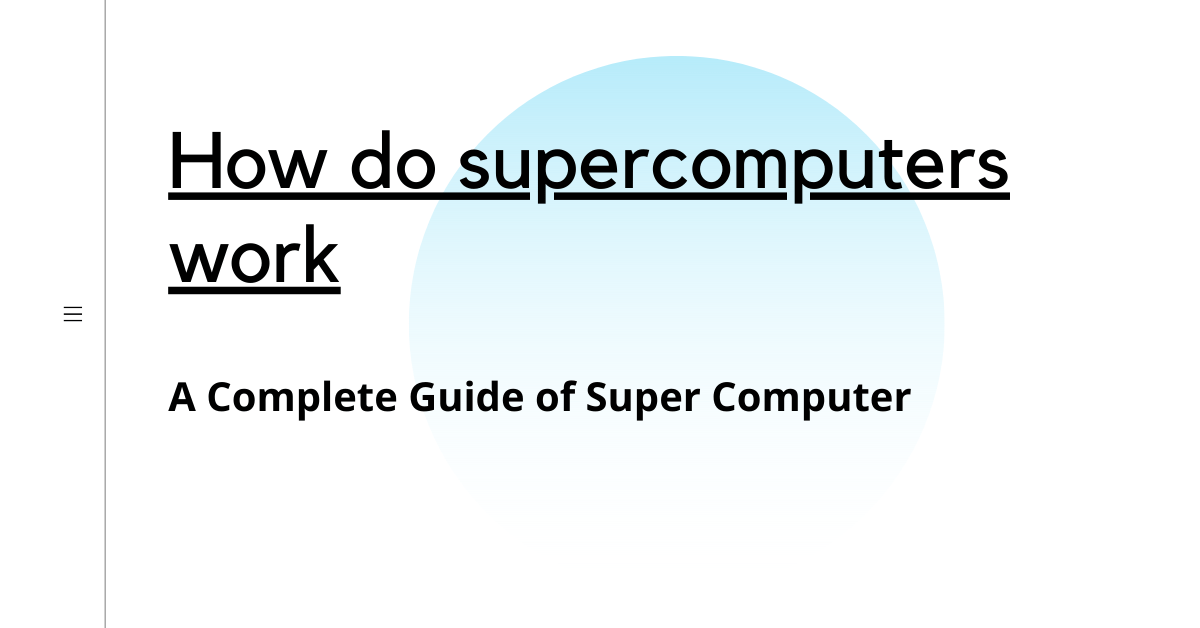 The supercomputer, as the name shows, is a high-speed and high processing computer. As compared to a general-purpose computer, the supercomputer has high-level performance.

Read How to Become an Accountant.

As we know that, any computer that powerful than the desktop computer is a supercomputer. And we also see that supercomputers are use in big companies and industries.

Like science and technology. So after that, our mind raised a question that how big supercomputer is? And how do supercomputers work?

So let’s clear these questions.

In our previous article on the central processing unit. We see that the highest speed of the processor is deca-core. It has 10 cores in it.

But a super machine that used in big research companies has thousands of nodes in it. Node means computer. And in every node, there are 10 to 12 cores.

This means in one thousand nodes there are 12000 cores working. Means their work performance is in the trillions cycle in a single second.

How do supercomputers work?

Again the question is that, how do supercomputers work? How do all these nodes work together? And also what software is used for?

So, some hardware is used to run these nodes (computers) together. But we write some software for that. This software is the source to talk node and hardware with each other.

Here in supercomputers, the work is divided into different processors. So each processor has a small amount of data. The processor communicates with each other or talk to each other. So the work of seconds is done in milliseconds.

To make it easy for you, suppose you communicate with your neighbor. And he communicates with other neighbors. And then talks are transferred from one person to another in some minutes. The same thing working here in super machines.

Linux software is used in supercomputers. The US is the leader of supercomputers in long run. China and Japan also play an important role. Countries are still active to make faster super-machines that make things easy.

The History of supercomputer

The history of supercomputers is start in 1960. When the first supercomputer was built for the US navy. They use it in research and development centers.

Other companies also built supercomputers. The history of supercomputers is full of these super machines. Like, in 1964, Seymour Cray design CDC-6600. Silicon transistors used in it that work more quickly. CDC-6600 become the fastest computer in the world at that time.

The only computer that compares with the performance of Cray’s design is ILLIAC IV. This was the first machine in which many processors work together. To solve a big problem in different parts.

ILLIAC IV is design in this way that runs a single stream of data fast. The design was finish in 1966. The system was larger and more complex than Cray.

Management of heat is a key issue in supercomputers. A large amount of heat-generating may reduce the lifetime of other computer components.

A simple computer consumes a large amount of electricity. This electricity is convert into heat. And then need cooling. Heat affects powerful computers in various ways. A computer has the ability to remove heat and makes the system cool.

Copper wires used to transfer heat into supercomputers. Energy transfer with a much high power density. So the system has a limiting cooling factor ability to remove waste heat.

Supercomputers used in different fields and industries. Most big companies used supercomputers. Supercomputer used in weather forecasting. It helps to make an observation of the weather more accurate.

The nuclear stockpile of the US is also managed by supercomputers. AI (artificial intelligence) also uses supercomputers to work fast and accurately.

Many people want to know about the price of supercomputers in Pakistan or India. They are curious about it. But I know no one in my readers even they are from Pakistan or US can’t buy a supercomputer.

China, the US, and other countries trying to build more powerful supercomputers. Supercomputers are also used in science fiction of old stories. But now, it is not a just story. It is true.

In this article, we clear all importance that a user’s mind has about supercomputers. Hope the concept of how to do supercomputers work is also understood. Maybe the next article on cloud computers or their architecture. Stay with me.

What are 8 Input Devices of Computer – With Types