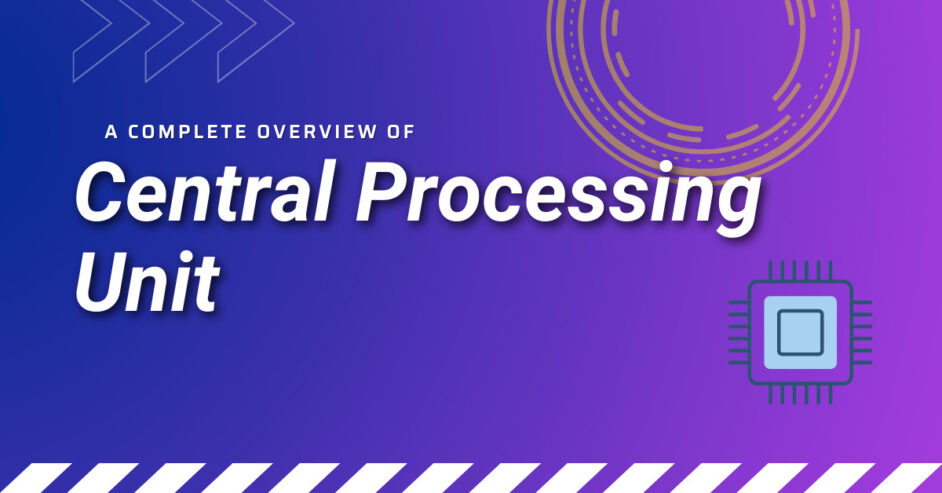 Hey readers! We have completed almost all the basics of computers. Now I start to explain each part of the computer. So you know about everything about computers. So, today we see about the central processing unit.

The central processing unit or CPU is the main part of the computer. It executes instructions. CPU performs input/output, arithmetic, and logic operations.

CPU handles all instructions that it receives from hardware and software. That’s why it’s called the brain of the computer. Without it, the functions of the computer never run.

The design and form of the CPU changed over time, but its fundamental operations remain the same.

What does a CPU do?

CPU doing the arithmetic and logic functions. It controls all functions of the computer.
It performs input and output operations specified by instructions.

The main part of the CPU is in the control unit. Which fetches data from memory and encodes or decodes the instructions.

There is no exact date in the record of the advent of the CPU. It is used with the first programmable computer. It may be use as execution software.

Custom CPUs use in the early days. These are use for important works. Central processing unit used with large computers.

After the revolution in technology and computer. The shape and design of CPUs change. Also, their size is smaller and smaller.

During the usage of transistors computer. The complexity in the design of CPUs also increased. A more complex and reliable computer built.

IBM also make there their CPUs in 1964. Those are good in both performance and speed.

Another method to manufacture interconnected transistors in small space was introduce. And the things going to revolutionize.

Another specific article reqired. To explain the complete history of CPU that my viewers understand this completely.

Now we complete everything about the central processing unit. And in our next article, I write the complete and detailed history of CPUs.

Now we see the types of CPU.

As we mentioned, the CPU is the main part of a circuit that executes the instructions. It manages all commands and calculations. After this, transfer to the other components of the computer.

The major types of CPU are single-core, dual-core, quad-core, Hexa-core, octa-core, and deca-core. These types of CPU define speed and efficiency. We will explain all these types below.

The old computer use a single-core central processing unit. These CPUs execute one command at a time.

The second command waits until the first one is executed. And after that the first command is completed, the second is started.

If the second command executes during the execution of the first command. Then the system is slow down. Its performance is based on its clock speed.

Two cores are comprised on-chip that’s why called dual-core. But actually, it is a single-core CPU.

Because of two cores, its speed is high and works faster. The second process is started, the first one is an end to complete. That’s why its speed is low by the time.

When you have many tasks like video editing, designing, etc. then you can use these types of CPUs. Quad-core is used for multitasking purposes.

Four cores are present in the processor that increases the speed and performance. They have great capabilities of multitasking. This means they can easily do many tasks at a time. It divides the workload into four cores.

Another multipurpose central processing unit has six cores on-chip. Its speed and performance are good enough than others.

Hexa-core speed and performance are suitable for multitasking than other CPUs. In 2010, the first Hexa-core CPU was launched in the Intel core i7.

The octa-core CPU has eight cores on its chip. These 8 cores make the work speed fast enough. This means the speed of the execution of functions is effectively fast.

These types of CPUs are used in advanced computers. When the workload is over then those computers use octa-core.

Deca core is the most powerful and successful central processing unit ever. It has 10 cores that work more efficiently and fast.

So, here are all types of CPUs. These types give you a clear idea that. As you increase the core of the central processing unit then the speed of the CPU also increases.

The operations of the CPU are fetching, decode and executing the instructions. It is a complete cycle in which the first CPU fetches the information. Then decode them. After that execute or store these instructions.

After fetching information, the CPU decodes this information in signals. And send these instructions or information to the other parts of the CPU.

The executing step is performed after the fetch and decode data. The execution depends on the architecture of the CPU. This may be single action or sequence of actions.

In the CPU, there is a control unit, registers, logic (like arithmetic), input/output, and main memory.

The control unit directs the operations of the CPU. It tells memory and other devices how to respond. Most of the computer work is managed by the control unit.

The ALU (arithmetic logic unit) is a digital processor in the CPU. It performs all the arithmetic work and other logic.

Here is the complete article on CPU. This is a short and smart article. In which definition of CPU, its parts and structure are defined in a good manner.

So, ready for our upcoming articles on CPU. CPU about its history and the best CPU for gaming on both mobile and desktop.

Types of MicroComputers – An Ultimate Guide

Computer Architecture – Complete Guide from a to z